“Challenge in the Tuxtlas” – Defenders of Wildlife Magazine
Few people realize that “our” migratory songbirds (warblers, thrushes, etc.) aren’t on vacation when they’re down in Central and South America for six months of the year; they’re integral components of many neotropical ecosystems–their ancient ancestors lived there year-round. I wrote about that in several articles about a World Wildlife Fund research and economic development project in the mountains of southeastern Mexico.> excerpts & photos 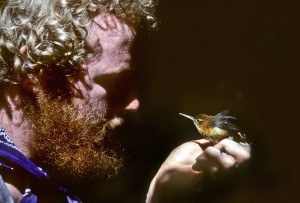 “The Saga of Bill and Dimple” – Audubon Magazine
Studying animal behavior in grad school at San Francisco State, I got interested in the question of animal awareness, so when an opportunity came up to volunteer for a field research project on Northern Elephant Seals breeding on the Farallon Islands, I eagerly signed on. I got what I asked for – an up-close, mind-boggling look at a fierce rivalry between two dominant male seals.
> excerpts & photos 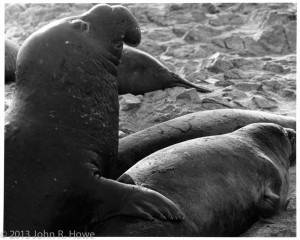 “Grander Images” – Alaska Magazine
Living in Alaska, I worked off and on as a field assistant to wildlife filmmaker Joel Bennet. We visited many wild areas of Alaska and I got to know a consummate “camera hunter” and dedicated conservationist. I wrote this profile to document what I learned.
> excerpts and photos 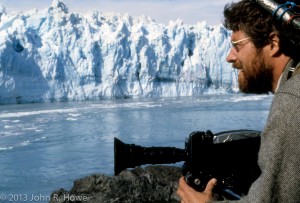 “The Red Light on Bligh Reef” – commentary for KTOO-Radio, Juneau, Alaska
This is one of a series of live radio commentaries on environmental subjects I did for KTOO, the PBS station in Juneau, Alaska. The previous summer I’d spent almost a month working on a film crew in Prince William Sound, so like many Alaskans who knew and loved that glorious place I was devastated and angry about the Exxon Valdez oil spill–and naive enough to hope that it might help Americans begin to kick our fossil fuels habit.
> commentary