“If that bear comes this way, women and children first,” says Joel. “Also the camera, any lenses you have time to grab, and the Nagra. Throw the water bucket to her–it might distract her.”

We are on Admiralty Island in Southeastern Alaska, on a low gravel bank overlooking a stream that flows out of the woods 200 yards in front of us, then along one edge of a wide tide flat and into the still gray waters of an inland bay. A female brown bear ambles along the far side of the tide flat. Joel is hunched over his camera, watching her through a 650mm lens. The Nagra (a tape recorder worth several thousand dollars) and a half-dozen lenses and other equipment are all around us on the ground. Joel’s rifle is propped against a nearby log.

The bear comes toward us. She sways as she walks. Her long claws swing up and forward just before she plants each paw. She is rich chocolate-brown on her paunchy belly and massive forearms, grizzled silver and cinnamon on her back, with a patch of light yellowish brown on her right rear flank. She wiggles her nose, tasting the breeze. Her movements are slow, almost lazy–and very, very graceful. It’s not easy to imagine outrunning her.

By 1978 Joel had quit lawyering and was working freelance in film. He shot a variety wildlife material for a Nova program and caribou footage for Survival Anglia, a British firm that specializes in natural history subjects. By the end of the next year he had finished filming his first exclusive assignment for Survival, a half-hour on Dall sheep. He has also now completed Survival films on brown bears and Glacier Bay, both half-hour specials for the CBS “World of Survival” series. He is now working on an hour special about polar bears, and half-hour specials on musk ox and Pacific walrus.

In Joel’s work there often are extended lulls as he waits for his subjects to appear or for the light to change. Sometimes we hole up in our tents for days at a time, waiting for rain to stop. When the action gets hot, though, we may work from dawn until nine at night, or even later in the long days of an Alaska summer.

Joel laughs as he tells the story of one faithful assistant who, after a hard day of filming Dall sheep high in the mountains of the Kenai Peninsula, politely suggested that “people get irritated when they go all day without water.”

“There’s no room for giving up on a shot,” Bennet insists, “or for trying to shoot around it. You can do a superficial treatment on a lot of wildlife subjects and probably please a lot of people, but it’s the extra-effort type of shooting that produces sequences and shots that people remember. At a certain point, though, you have to force yourself to get away from a shot you’ve been after. You may have to get some relatively mundane shots of plant life, let’s say, to make the film whole. So you pull yourself back and force yourself to shoot a bunch of alders.”

It is late afternoon before we are clear of the alders and climbing through alpine meadows dotted bright red and blue with wildflowers. We’ve just found a level camping spot and have set our packs down when Joel quietly says, “Look!” and points to the crest of the ridge just above us. A massive old mountain goat peers down, only his head and shoulders visible, his long beard billowing in the wind.

Almost immediately we are climbing again, carrying only camera pack and tripod. We are almost to the top of the mountain before we spot three goats moving just beyond the crest of the ridge below us. We creep stealthily to a hollow just short of the ridge. Joel sets up the tripod and has just mounted the camera with a zoom lens when the billy walks over the ridge and immediately freezes, staring down at us in amazement.

Joel bends slowly over the camera, a down vest over his head and shoulders to shield the viewfinder from the glare of the sun. The gears of his Arriflex hum softly as six more goats walk into view and form a tight little group around the billy. They’re no more than 20 feet from us. They toss their heads, glance nervously at each other as if trying to make a group decision, then stare back at us. Wind ruffles their shaggy coats, and the sun, just beginning to set beyond the distant peaks of the Fairweather Range, glows from behind them, outlining each animal in a soft golden aura. 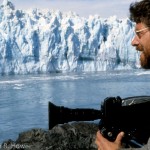 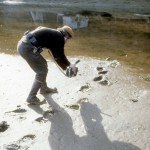 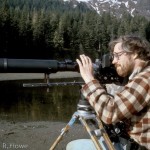