“The Saga of Bill and Dimple” – Audubon magazine

I am draped full-length on the ground, fitted in among a jumble of rocks on Southeast Farallon Island. The restless image of a female northern elephant seal fills my camera’s viewfinder. She is ten yards away from me now, at the edge of the herd, and seems to be looking at me, or through me, to somewhere beyond. Or maybe she is not looking out at all but within to her pup which is about to be born. Her gaze breaks, and I am free from her big dark eyes. She pivots around on her belly, pushing off with her front flippers, and moves quickly toward another cow. She snarls. The other cow rears and backs off. The cow in labor pauses, then eases onto her side, gracefully cupping the palm of one front flipper above her as if posturing in a dance. She rolls onto her belly again and rises up on her front flippers, nose pointed up, back arched. Her hind flippers are off the ground, and she wags them slowly back and forth. Her eyes are closed. And then her hind flippers swing in my direction, and I glimpse black between them, glistening, the pup emerging.

Between one and three million years ago the warming of the seas at the end of the ice ages divided the elephant seal population near the equator. Today zoologists recognize two species. The southern elephant seal, Mirounga leonina, is now found in the Antarctic and along the southern coast of South America, while the northern elephant seal, Mirounga angustirostris, ranges from northern Mexico to southern Alaska. They are highly specialized for swimming and feeding in the sea. The doglike limbs of their ancestors have become flippers. Along with all the other species of seals, the sea lions and the walruses, they are grouped in the suborder Pinnipedia, “the feather-footed.” They swim with alternating inward strokes of their hind flippers, folding each flipper during its outward recovery stroke. Power comes through thick muscles attached to a skeletal system that can bear the stress of a continuous side-to-side swimming motion. They steer with their front flippers and with slight movements of their heads. Their top swimming speed is about ten miles an hour. They can dive down to three hundred feet and stay submerged for up to forty minutes. A thick layer of blubber insulates them against the cold water. They eat sea animals. A young male harpooned off San Diego in 1929 had seven rat fish, one California dogfish shark, one puffer shark, three skates, and four squid in his stomach.

As soon as I begin to puzzle over Bill’s decision I have to remind myself that “aggression” refers to a variety of responses based on complex interactions between an animal’s genetic potential and what it has learned in its lifetime–and I don’t know, no one knows, where Bill was born or where he spent the first years of his life. He wasn’t even tagged until he was six or seven years old.

Also, aggressive acts aren’t solitary acts. Bill’s decision represents a development in his relationship with Dimple. No one knows when the two of them first met. They were seen fighting last year and have been observed exchanging many vocal challenges this year. Surely they’ve often encountered each other when no human was around. And what about their first contest this afternoon? What might have encouraged Bill to try again?

And what about Bill as a northern elephant seal? Was this aberrant behavior, a kind of madness somehow related to the fact that the genetic potential of the species was clubbed and shot full of holes by humans one hundred fifty years ago? Certainly he had plenty of cows to mate with on Sand Flat. Now he had lost access to them, abandoned his position at the top of the hierarchy to launch a determined campaign against an opponent who soundly defeated him three times last year. Images of human violence and words contaminated by my own projections–“grudge,” pride,” rivalry”–crowd my thoughts. Suddenly I’m not looking at Bill anymore, no longer attempting to analyze his decision objectively. I’m looking at myself, boggled by the mysterious nature of awareness–my own as well as Bill’s.

Still, I don’t doubt that Bill is aware of what he is doing. He certainly knows who Dimple is and where to find him. He has a plan, and he has made a decision to adopt that plan. He means to return to Mirounga Beach and he intends to fight. Though I like to imagine that the decision came to him twenty minutes ago as he lay soaking his wounded nose in the tidepool below Last Resort, I can only assume that he had decided by the time he swam past the entrance to Log Channel and headed around the curve of Low Arch Terrace to the tidepool he lies in now. 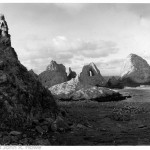 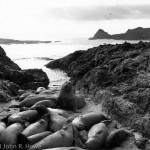 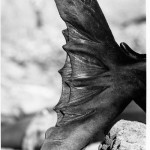 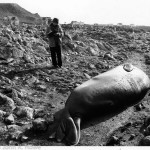 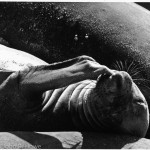 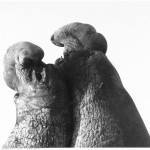 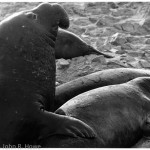 Young male watches for alpha male while attempting to mate. 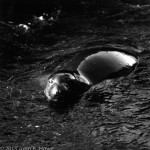 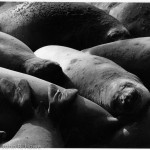 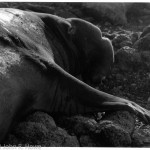 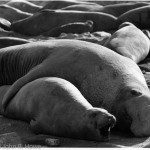 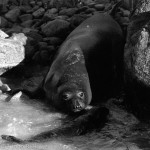 Female with pup washed into water by waves.